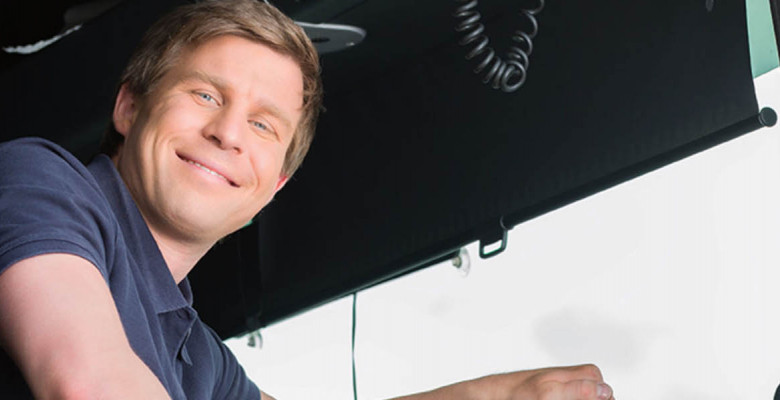 We’ve taken the liberty to gather some of these stand-out stories of inspiration. Most of them are good from the last months.

Saving a Utility Worker from His Fiery Bucket Truck

The trucker was at the right place and the right time to become a hero!

With just minutes to spare before the truck exploded, a police officer ran over to Efrain Zepeda, a tractor-trailer who had stopped at a nearby intersection.

The police officer asked for help.

Without any second thoughts and without care for his own safety, Zepeda maneuvered his truck so the utility worker could climb on top of it. It was a dangerous move because the truck driver had to place the gas tank on the right side immediately next to the other truck’s flames.

Luckily, a fatal incident was avoided.

“Our citizens never cease to amaze us!”

A miracle into the dark

Joe Hylton has been a driver for more than two years and, by his count, this is the seventh time he has come to the rescue on the scene of an accident.

On his night shift, Joe was driving on Delaware’s Route 1, when he came across the scene of a bad accident. Both cars were almost fully destroyed and a man was frantically running down the road.

Hylton reacted immediately. He pulled over and walked into the middle of the high-speed highway in the dark to direct other drivers away from the two wrecked cars. Then one of the injured drivers started screaming. He couldn’t find his daughter.

Without hesitation, Joe began to search through the marshy area along the road using just his flashlight.

He finally found a small gray bundle. At first, he was afraid to look, knowing the type of injuries the toddler could have sustained after being ejected from the car.

Unexpectedly, the little girl reached up to him without a single scratch.

The tearful dad thanked Joe, who got back in his truck and got back to work.

Volunteering with a Local Food Bank

In February, employees from the trucking company Bestpass, volunteered their time to work with Feed Albany.

They gave up an afternoon of their time and spent it preparing over 500 meals. These meals helped make a difference in the lives of many people from Albany and the Greater Capital Region who were struggling.

The drivers not only helped others with their afternoon of volunteering, but they enjoyed the experience.

One of the participants said, “It was wonderful to work together to help feed our community members who are in a greater need.”

Sometimes in our hectic daily life, we are nervous, overwhelmed, and anxious. We fail to see the good news when it is actually all around us. These stories above are just a few examples.

Be good, and the others will be good with you!

The Trucking Industry Faces Massive Shortages of Drivers in ...

The trucking industry is experiencing a driver shortage, with an estimated shortage of up to 120,000 drivers by 2022. The Bureau of Labor St ... more ...

Bay & Bay Increases Driver Pay Again: What this Means for Yo ...

Bay & Bay has increased their driver pay again! Bay & Bay is always looking to provide the best service possible for all of its customers. B ... more ...

Are There Drivers Shortages in the Trucking Industry?

Trucking is an essential industry in the U.S. economy, but it is facing a shortage of drivers. According to the American Trucking Associatio ... more ...

Whether you are looking to start your own trucking business, or simply want to expand and get financing to invest in new equipment, the road ... more ...

Top 6 Semi-Truck Seats For Long Hours On The Road

Even though extremely rewarding, truck driving may oftentimes take a toll on your physical health. As commercial truck drivers spend most of ... more ...

Commercial truck driving is currently one of the most popular jobs in America due to the many benefits that go beyond just the good salary a ... more ...

Read more in our blog